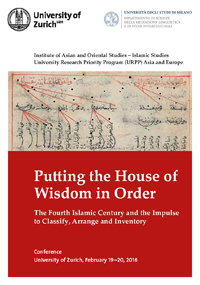 The conference is supported by the Swiss National Science Foundation, the Swiss Academy of Humanities and Social Sciences, and the Zürcher Universitätsverein.

The fourth Islamic century (roughly the tenth century CE) witnessed a proliferation of texts that aimed in one way or another to codify and render accessible the scientific and literary production of the preceding Islamic centuries and of the pre-Islamic cultures whose intellectual heritage had entered the purview of Arabic scholarly tradition. In an age that combined consolidation with renewed scientific ingenuity, many authors sought comprehensiveness in compiling, arranging, editing and commenting upon the products of discrete, well recognized domains of scholarly endeavor. Others were involved in a project of surveying the whole sweep of human knowledge, mapping the topology of its distinct parts and describing their contents. This workshop will explore motivations for, and manifestations of the period’s enthusiasm for classification and arrangement.