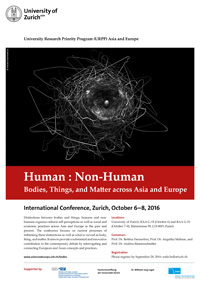 Distinctions between bodies and things, humans and non-humans organize cultural self-perceptions as well as social and economic practices in Asia and Europe in the past and present. They form the basis of and justification for power relationships, for privileging some bodies over others, and for subjecting, using and consuming bodies and matter classified as “things” or “non-human.” Recent bio-technological developments allow, at a very material level, the crossing of boundaries between bodies that used to be thought of as “generically” or “naturally” different. Concurrently, attempts to create artificial, intelligent bodies have raised a debate about global bioethics or “transhumanism” as a new referential framework of discourse. Ideas of life and vividness (bios) are re-assessed, and the arbitrariness of the norms and values implied in these notions emerges as a persistent feature in their practical application. At the same time, concerns about the continuing destruction of natural resources and the environment and the growing impact of climate change have resulted in conceptualizing the present age as the “anthropocene”. Environmental movements resist these developments and often draw on criticism of Western modernity and neo-liberalism. Forms of protest and criticism include also the implementation of protected zones and laws in which the status of non-humans is changed in order to allow their protection. New theoretical positions are sought for, such as, “planetary” or “holistic” thinking, or object-oriented philosophies. In so doing, academics and intellectuals turn to “traditional” concepts and practices in Asian and European societies as possible resources for redefining relationships between bodies and things, humans and non-humans, sentient and insentient beings. These concerns are also shared by artists and authors who endeavour to spell out blueprints for less violent planetary co-existence, or more radically, non-violent planetary conviviality. While doing this, they explore new artistic, often intermedial, forms of articulation in order to highlight the presence or absence of non-humans, of matter and landscapes.

The conference aims at exploring this constellation and the challenges posed by the current reconfigurations of relationships and boundaries between human and non-human, things and bodies across Asia and Europe.