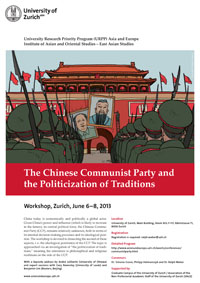 An article on the workshop is published on UZH News:
«Weshalb die Chinesen Konfuzius auferstehen lassen»

China today is economically and politically a global actor. Given China’s power and influence (which is likely to increase in the future), its central political force, the Chinese Communist Party (CCP), remains relatively unknown, both in terms of its internal decision-making processes and its ideological position. The workshop is devoted to dissecting the second of these aspects, i. e. the ideological position(s) of the CCP. The topic is approached via an investigation of “the politicization of traditions,” meaning the references to philosophical and religious traditions on the side of the CCP.

At the workshop, two fields of inquiry will receive special attention:

These two fields of inquiry do by no means reflect marginal phenomena of political positioning, but represent neuralgic points of the CCP's ideological agenda. There are many political contexts that may be investigated in view of the problematique of the politicization of traditions such as party and cadre discipline, social order, civil society and the publich sphere, culturalist legitimization of the party and the nation, traditions as resources for use of soft power, or ideological framing of China's 'peaceful rise'.