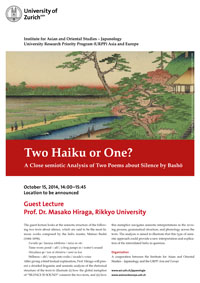 The guest lecture looks at the semiotic structure of the following two texts about silence, which are said to be the most famous works composed by the haiku master, Matsuo Bashō (1644–1694):

After giving a brief textual explanation, Prof. Hiraga will present a detailed linguistic and semiotic analysis of the rhetorical structure of the texts to illustrate (i) how the global metaphor of “SILENCE IS SOUND” connects the two texts, and (ii) how this metaphor navigates semiotic interpretations in the revising process, grammatical structure, and phonology across the texts. The analysis is aimed to illustrate that this type of semiotic approach could provide a new interpretation and explication of the interrelated haiku in question.