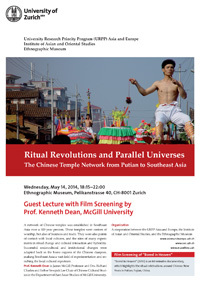 Information on the film

A network of Chinese temples was established in Southeast Asia over a 500 year process. These temples were centers of worship, but also of business and trade. They were also points of contact with local cultures, and the sites of many experiments in ritual change and cultural interaction and hybridity. Successful socio-cultural and institutional changes were adapted back in the home regions of the Chinese diaspore, making Southeast Asia a vast field of experimentation and enriching the local cultural repertoire. New kinds of transnational flows and spaces opened up, and new spaces for changing gender roles and ritual forms evolved. This talk explores these themes by looking at the different religious universes of the Putian community in Southeast Asia.

“Bored in Heaven” (2010) is an 80-minutes documentary, which highlights the ritual celebrations around Chinese New Years in Putian, Fujian, China. It is based on 20 years of long-term collaboration between Kenneth Dean and Zheng Zhenman. It illustrates the growing intensity of local traditions in Southeast China, as rural villages and their temples transition into a new century. The film builds on the story of the Theater God as told in a ritual performance, by actors, opera singers and puppeteers.

Professor Kenneth Dean is James McGill Professor and Drs. Richard Charles and Esther Yewpick Lee Chair of Chinese Cultural Studies in the Department of East Asian Studies of McGill University. His publications include Ritual Alliances of the Putian Plains (with Zheng Zhenman, 2 vols., 2010), Epigraphical Materials on the History of Religion in Fujian: The Quanzhou region (with Zheng Zhenman, 3 vols., 2004), Lord of the Three in One: The spread of a cult in Southeast China (1998), Taoist Ritual and Popular Cults of Southeast China (1993) and First and Last Emperors: The Absolute State and the Body of the Despot (with Brian Massumi, 1992).