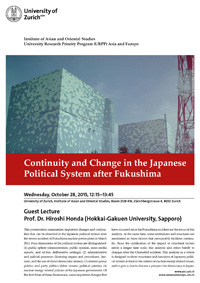 This presentation summarizes important changes and continuities that can be observed in the Japanese political system after the severe accident of Fukushima nuclear power plant in March 2011. Four dimensions of the political system are distinguished: (1) public sphere (demonstration, public opinion, mass media reports, and ad-hoc deliberative settings); (2) administrative and judicial processes (licensing organs and procedures, lawsuits, and the use of direct democratic means); (3) interest group politics and party politics (labor unions, political parties); (4) nuclear energy related policies of the Japanese government. Of the first three of these dimensions, some important changes that have occurred since the Fukushima accident are the focus of this analysis. At the same time, some institutions and structures are mentioned as those factors that presumably facilitate continuity. Since the clarification of the impact of structural factors needs a longer time scale, this analysis also refers briefly to changes after the Chernobyl accident. This analysis as a whole is designed to show structures and functions of Japanese political system at least in the context of nuclear energy related issues, and to give a clue to discuss a prospect for democracy in Japan.