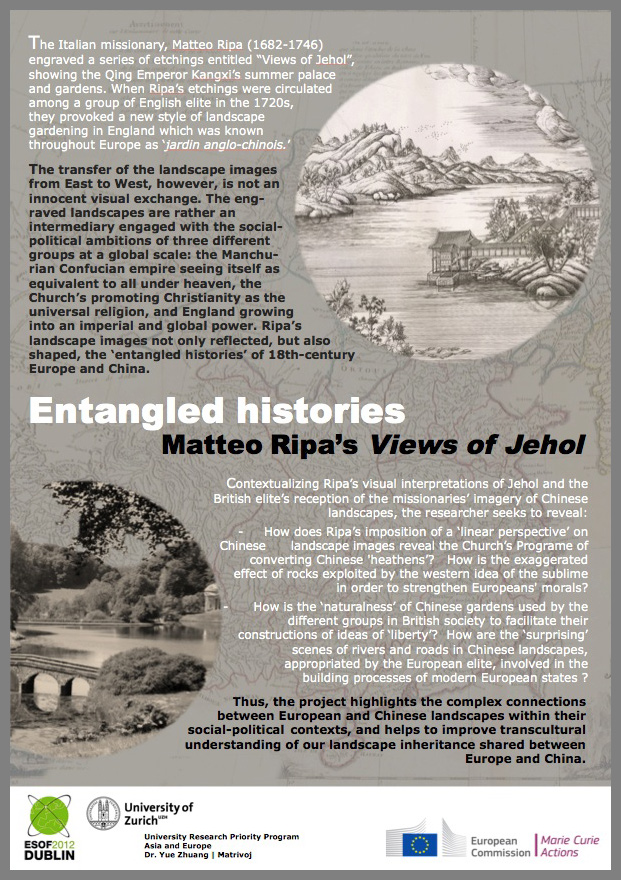 The Italian missionary Matteo Ripa (1682-1746) introduced a series of copperplate engravings, entitled ‘Views of Jehol’, showing the Qing Emperor Kangxi’s (1661-1722) summer palace and gardens to Lord Burlington and his circle in 1724, who then introduced a new style of landscape gardening to England known throughout Europe as ‘jardin anglo-chinois’.

From the multidisciplinary perspective of ‘entangled histories’, I examine the dialogues between Matteo Ripa’s copperplate engravings of the ‘Views of Jehol’ and the original woodcuts of Kangxi’s ‘Thirty-six Views’ designed by Shen Yu, so as to reveal this visual art exchange taking place at the Qing court as an encounter of Kangxi’s imperial project within a syncretist framework of Neo-Confucianism and the Church’s expansion underpinned by Neo-platonic tenets. Furthermore I scrutinize the 18th-century British conservative elite’s receptions of missionaries’ images and descriptions of Qing imperial gardens, arguing that the English landscape movement appropriates the Christian-interpreted ‘Chinese’ elements from their desire to build a Neo-Platonic imperial power.

Thus, the project will highlight the complex connections between European and Chinese landscape gardens within their social, political and economic contexts. It will thereby enrich the trans-cultural historiography of landscape gardens and help to anchor the notion of an interlinked Eurasian art history.