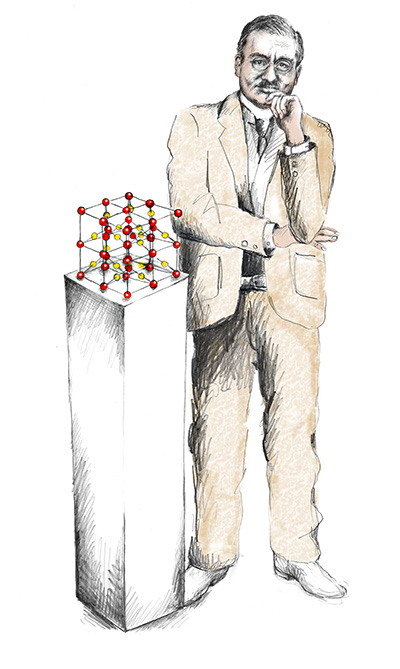 1911-1912 Professor for Theoretical Physics at the University of Zurich.

The Leonardo of Physics

Peter Debye was often described as the “Leonardo da Vinci” of the 20th century. Many methods and laws in physics bear his name, for instance the “Debye temperature” for his theory on the specific heat of solid bodies, which he developed at the University of Zurich.

Peter Debye was just 26 years old when, in 1911, he took on his first academic appointment as professor for theoretical physics. Wilhelm Conrad Röntgen, who was teaching in Munich, gave him an outstanding reference, saying Debye represented “an excellent acquisition” for the University of Zurich.

The young researcher’s outstanding talent quickly became apparent in Zurich. On 10 December 1911, Debye wrote to his mentor Arnold Sommerfeld in Munich: “Dear Sommerfeld, in the last 48 hours I have discovered something really quite special.” This “something special” was to occupy Debye for 40 years and to become the basis for his Nobel Prize in 1936. It was the idea that there are molecules that are permanent electrical dipoles. The “dipole moment” of a substance can be measured, thus enabling conclusions as to its molecular structure. The brief period of Debye’s activity at the University saw more fundamental work based on the hypothesis of permanent dipoles, for example, on the behavior of molecules when temperatures change.

Peter Debye left the University of Zurich and Switzerland in 1912, but returned to Zurich in 1920. Now famous, the physicist took on a professorship at ETH for some seven years.