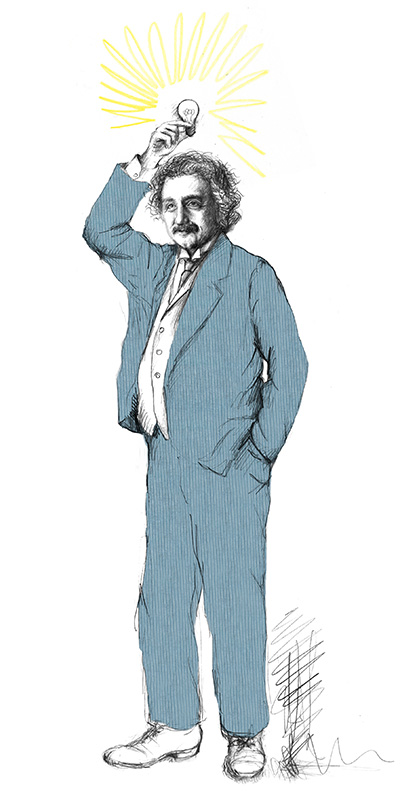 “for his services to theoretical physics, and especially for his discovery of the laws of the photoelectric effect”

Zurich and the Annus Mirabilis

A Quantum of Light

1905 was Albert Einstein’s annus mirabilis: he published no less than five groundbreaking papers. Among these was his Light Quanta Hypothesis, for which he was awarded the Nobel Prize.

In 1905, 26-year-old Albert Einstein submitted to the University of Zurich his dissertation entitled “Eine neue Bestimmung der Moleküldimensionen” (A New Determination of Molecular Dimensions). Within just a few months, he published another four papers, any of which would today be regarded as worthy of a Nobel Prize. His groundbreaking work included the Theory of Special Relativity and the Light Quanta Hypothesis; the latter being singled out for the Nobel Prize in Physics in 1921.

Einstein's revolutionary Light Quanta Hypothesis states that light consists of tiny bundles of energy (quanta). If the energy of light shining on a metallic surface is sufficient, the surface will emit electrons. The electrical charge released during this process can be measured. This phenomenon is called the photoelectric effect. Though this effect had long been known in physics, Einstein was the first to explain it correctly, by developing the Light Quanta Hypothesis. Only some twenty years later was the hypothesis confirmed experimentally.

From 1896 to 1900, Einstein studied physics at the Federal Polytechnical School (today’s ETH). Although the only successful student of his year, he was not offered an assistant’s position there when he completed his studies – probably on account of his average grades, and because he often skipped classes. Rather than attend lectures, Einstein preferred to stay at home and study the masters of theoretical physics, with “holy fervor,” as he later recalled.

As he did not obtain a position at ETH, Einstein worked from 1902 to 1909 as an employee of the Federal Patent Office in Berne. In 1909 the University of Zurich created an associate professorship in theoretical physics for him. This was Einstein’s first academic position; he left it in 1911 for a professorship in Prague.

Einstein returned to Zurich from 1912 to 1914 as a professor at ETH. In 1914 he left for Berlin, and even turned down a later offer of a double professorship at the University of Zurich and ETH. He emigrated to America in 1933, never to return to Europe.