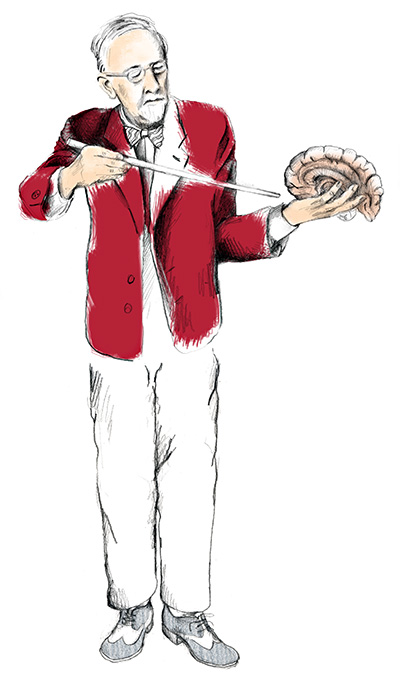 Nobel Prize in Physiology or Medicine 1949

The Puzzle of Sleep

The Mechanism of the Interbrain

Walter Rudolf Hess created a cartography of the interbrain and explored its functions – in the interest of better understanding the phenomenon of sleep.

Walter Rudolf Hess took a roundabout route to his true calling. After studying medicine at the University of Zurich, graduating with a thesis on the viscosity of blood, he worked as an ophthalmologist in Rapperswil. He did not, however, find happiness as a practicing physician. As a result, in 1912 he took a position as assistant to professor Justus Gaule at the Institute of Physiology at the University of Zurich – despite his wife Louise’s reservations about the financial consequences of this step.

Hess submitted his habilitation on the cardiovascular system, thus earning the right to teach at university. In 1917, he was appointed professor of physiology at the University of Zurich. As head of the Institute, Hess was free to choose his own area of research and, after initially investigating topics related to circulation, from 1929 onwards he focused his interest on sleep. The biological function of sleep had long represented a puzzle to scientists. Walter Rudolf Hess understood it as an essential means of allowing the body to recover from daily activities.

Because sleeping behavior is controlled in the diencephalon, or interbrain, Hess set out to research this area of the brain. To do so, he used cats, stimulating their interbrains with electric current. After being subjected to light electric stimulus, the animals displayed, for instance, drowsiness or aggressive behavior, depending on the position of the electrodes inserted in the brain. The traces of the electrodes could then be observed in the interbrains of the euthanized animals. Thus, millimeter by millimeter, the brain tissue was explored. On the resulting maps, Hess was able to allocate individual functions to localized areas of the brain. It was for his discovery of the functional organization of the interbrain that Walter Rudolf Hess was awarded the Nobel Prize in 1949.

The possibility that his basic research could result in therapeutic applications was not one of Hess’s key concerns. Nevertheless, his methodology of deep electrical stimulation of the brain has found successful application in recent years in treating the symptoms of Parkinson’s Disease and other motor disorders. Sleep researchers are today continuing Walter Rudolf Hess’s work and investigating whether deep brain stimulation can also help people with sleep disorders.