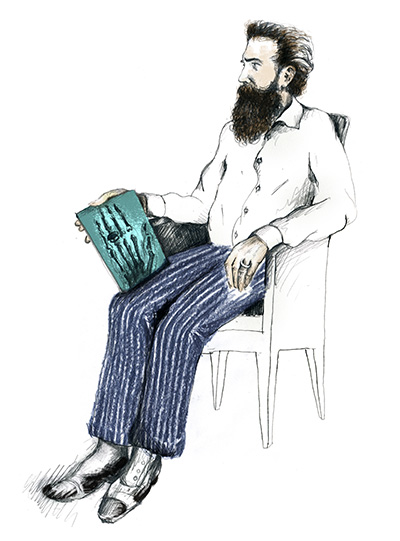 In 1869 Doctorate at the University of Zurich.

“in recognition of the extraordinary service rendered by the discovery of the remarkable rays subsequently named after him.”

The Dandy and the X-Rays

Wilhelm Conrad Röntgen developed his passion for physics in Zurich. A quarter of a century later, he discovered the rays that rendered humans transparent.

What would Wilhelm Conrad Röntgen’s life have been like without the Zurich years? Any answer must be speculative. All the same, it was at Zurich’s ETH (then known as the Federal Polytechnical School) that Röntgen found his way to physics, and at the University of Zurich that he obtained his doctorate with his “Studien über Gase” (studies on gases).

Röntgen began his studies in the mechanical-technical department of ETH in the winter semester of 1865. He evidently thought little of exerting himself intellectually, and played the elegant dandy, with luxurious lodgings on the Seilergraben. Many an hour was spent rowing on the lake and hiking in the mountains.

At ETH, Röntgen had the good fortune to encounter inspiring teachers. The professor who took on the idle Röntgen was Gustav Anton Zeuner, professor of mechanical engineering from 1855 to 1871. He also supervised Röntgen’s doctoral thesis at the University of Zurich.

Röntgen’s encounter with the young physicist August Kundt was to prove a decisive stroke of fate. After completing his qualification as an engineer, Röntgen was undecided as his future. Kundt, then a professor at ETH, invited the young man to his laboratory. Here, Röngten acquired the precision in experimentation for which he was later renowned; Röntgen had been won over to physics. At that time, ETH was not authorized to award doctorates. The University was accommodated under the same roof, so it transpired that, in 1869, Röntgen presented his thesis at the University of Zurich, and thus left the city with the title “Dr. phil.” When in 1870 Kundt followed a call to Würzburg, he took Röntgen with him as his assistant.

25 years later, on 8 November 1895, in his laboratory in Würzburg, Röntgen, now professor of physics, discovered a new type of rays: X-rays, and thus made human beings transparent. The first known Röntgen image shows the hand of his wife, Bertha. Within a very short space of time, Röntgen’s discovery not only made international headlines, but triggered a veritable tsunami in scientific circles. A Zurich doctor, Röntgen’s colleague from Würzburg, Albert Kölliker, suggested that the new X-rays should be called “Röntgen rays” in honor of their discoverer. In German-speaking countries, an x-ray image is termed a “Röntgenbild” to this day.