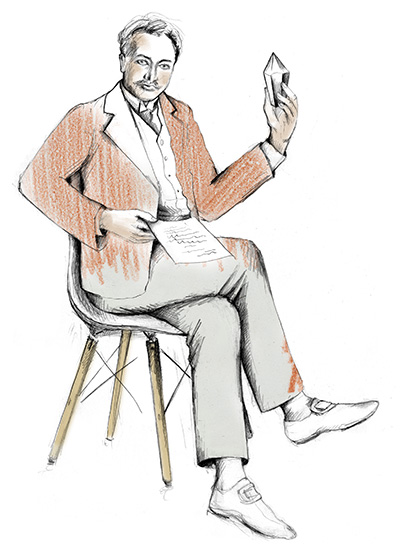 1912-1914 Professor of Theoretical Physics at the University of Zurich.

“for his discovery of the diffraction of x-rays by crystals”

Max von Laue solved two longstanding problems with a single experiment: He clarified the nature of x-rays and laid the cornerstone for a procedure that reveals the atomic structure of matter.

Max von Laue arrived Zurich in October 1912 to commence the first professorship of his academic career. Just prior to receiving his appointment in Zurich, this career had gained considerable momentum: In the spring of the same year, in Munich, Laue had conducted the revolutionary experiments that made him famous in the world of physics and, within two years, would bring him the Nobel Prize.

With the legendary Munich experiments, von Laue, a mathematician and a physicist, solved in a single stroke two problems that had stymied researchers at the beginning of the 20th century: He clarified the nature of x-rays by showing that, like light, they were electromagnetic waves, and he opened the door for entirely new insights into the atomic structure of matter.

In a pioneering experiment, von Laue beamed x-rays through a copper-sulfate crystal. Then, in the spring of 1912, what the scientific world had long been seeking became visible on a photographic plate mounted behind the crystal. Around the main beam of x-ray light, appearing as large dark spot on the plate, a pattern formed of much smaller spots, some darker, some lighter. They stemmed from the x-rays, which – like visible light through a prism – had been diffracted by the atoms of the crystal. It thus became evident that this was very short-wavelength light.

But not only that: On the basis of von Laue’s discovery, British scientists William und Lawrence Bragg were soon able to demonstrate that the pattern left by the diffracted rays represent a sort of atomic fingerprint of the crystal. The analysis of this specific pattern enabled the researchers to reach precise conclusions about the spatial structure of a crystal. Max von Laue’s discovery thus laid the foundations for the analytic processes in x-ray crystallography, processes that are today indispensable for research in biology, chemistry, and materials science.

In the two years he spent in Zurich, Max von Laue continued to work successfully on his theory. In 1914, shortly after he had left Zurich for Frankfurt am Main, he was awarded the Nobel Prize.