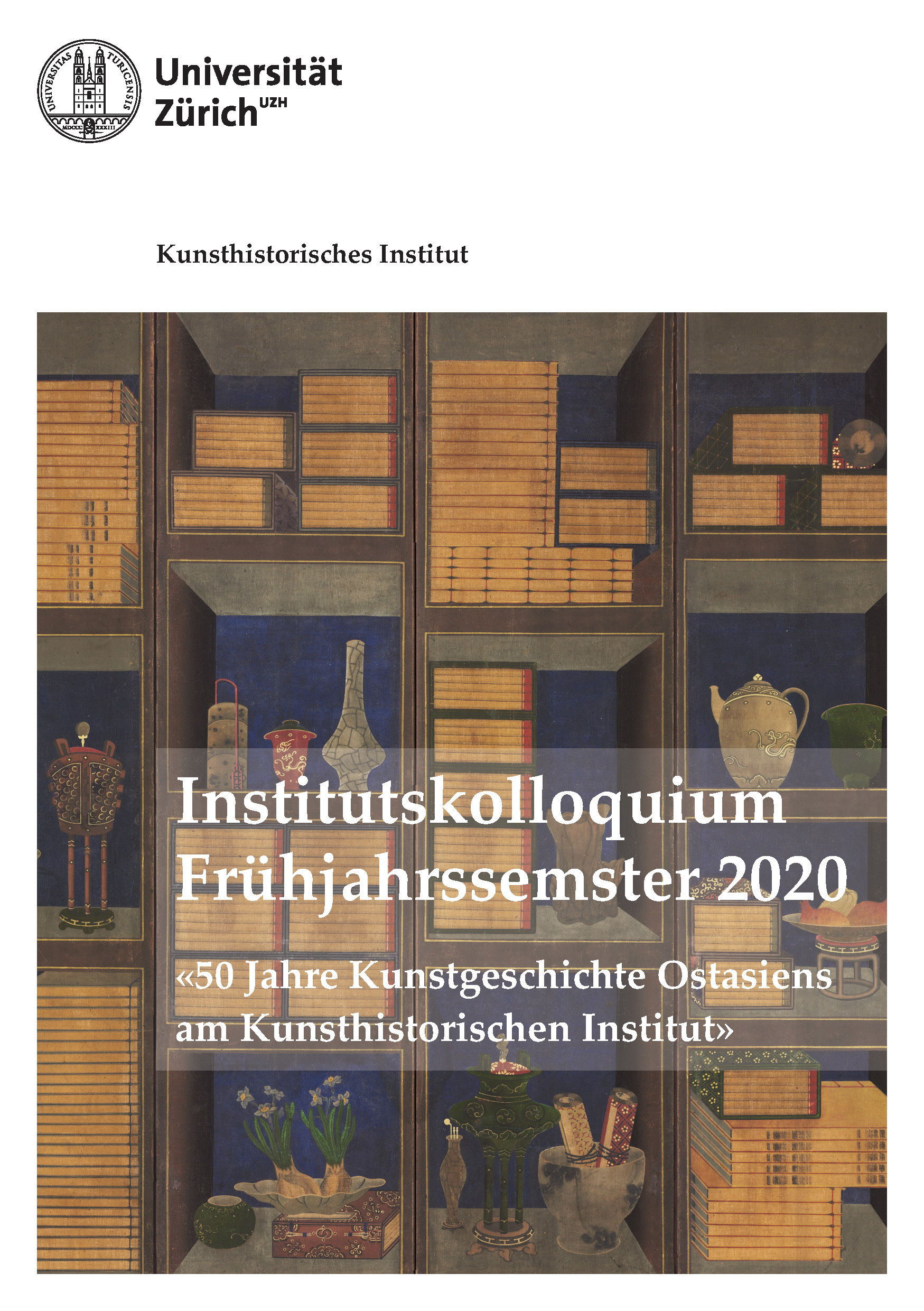 The first lecture in East Asian art history at the University of Zurich was held by Professor Helmut Brinker in 1970, thereby inaugurating half a century of courses on East Asian art history at the university. During this time, the Section for East Asian Art (KGOA) has worked with hundreds of students, dozens of doctoral students, as well as numerous museum exhibitions and international symposia. The KGOA will celebrate this year with numerous activities, including this institute colloquium, which will use this opportunity to invite leading experts on Japanese, Chinese, and Korean art to Zurich to give lectures on key aspects of the discipline.

The excavations of tombs with murals from the Han dynasty (206BC–220CE) brought to light a great quantity of very rich archaeological material which has contributed considerably to our knowledge of how the Han people viewed the afterlife and their place in the cosmos, and how this view was reflected in their posthumous, underground home.
The present lecture will therefore focus on the reflection of cosmology in the architectural and pictorial design of the Han tombs with murals. We will discuss how the Chinese understand the cosmos, its shape and its functioning, how did they divide the sky and how all these ideas reflected in their construction of the Han tombs with murals. We will thus step by step build a Han dynasty tomb to construct a micro-cosmos.

No doubt, there were beautiful women (bijin) and actors (yakusha) of the kabuki theatre in Edo-period Japan, but no bijinga, nor were there yakushae. Prints portraying courtesans or actors were called sugatae, that is ‘pictures of figures’ at the time. Terms such as bijinga and yakushae are Meiji constructs. In much the same way, there was something like a floating world, the ukiyo, but no ukiyoe. Early print designers called themselves ‘Japanese painter,’ Yamato eshi, or Nihon gakō, most likely to explicitly dissociate themselves from the Chinese inspired Kanō-tradition.
Even more serious is the circumstance that most studies of Japanese prints totally ignore figures of production and the sizes of edition – how large is the market, these prints were a totally commercial product. Taking together all single prints designed in the period prior to full colour printing, we are probably not even looking at something like the total oeuvre of Utagawa Hiroshige. Looking just at prints of actors, there is a big difference between those designed in the 1730s and 1740s by the Torii, the Okumura, and Ishikawa-traditions, to a total of some 25 to 40 designs per year, whereas some individual members of the Katsukawa-tradition would easily have an annual production amounting to 25 to 40 designs in the 1770s and 1780s. And at the time, nobody could foresee that someone like Toyokuni would, in the 1810s, design close to 200 actor prints each year. Indeed, they catered to very different audiences. And that bowl of noodles that would buy you a print … well, maybe the Toyokuni, but not a Katsukawa Shunshō or even a Torii Kiyomitsu.

For the past couple of decades, a growing number of historians of Korean art has investigated artistic connections between late Chosŏn Korea and Europe. By pointing out the acceptance of European painterly techniques such as one-point perspectives, chiaroscuro, camera obscura, repoussoir, and visual artifice taken up by late Chosŏn elites, recent scholarship has explained how and why early modern Korean artists were able to adopt and learn the new styles and programs of Western art, which were based upon a completely different pictorial tradition. This research path may itself not pose any analytical disparities, but it rides on a certain level of historical nuance: Even though late Chosŏn was known to be a period of high conservatism and isolation, the seeds of modernity and globalization were nonetheless explored and largely embraced by its artists and critics. But the unbiased and unprejudiced minds of late Chosŏn artists celebrated in modern scholarship have not been equally illuminated when it comes to their relationship to the Japanese art of the time. By introducing evidence that testifies to the late Chosŏn public’s active interest in Japanese art, this paper will point to the neglected exchange of art and ideas between early modern Korea and Japan, and expose how age-old academic conventions and nationalism remain firmly fixed in the study of East Asian art history.

According to tradition the founder of Chan or meditational Buddhism, Bodhidharma, originated from India, yet his legend and first representations are more typically associated with China and his legendary figure is frequently seen in the visual art and popular culture of the East Asian countries. In my talk I focus on the visual representations of Bodhidharma as they became popular in Korea and Japan, attempting to show the basic differences in the popularization of the visual images of Bodhidharma in these countries, focusing mainly on the visual appearance and iconography. The power of the image is seen in the commercialization of representations of Bodhidharma, particularly in Japan, where this practice occurred much earlier than in Korea and developed different traditions compared to those in China, where the legend came from.

This paper focuses on the role of reproductions of Japanese works in the collection of the British Museum, such as fine reproductions of the Kudara Kannon and the wall painting of the Golden Hall of Hōryū-ji temple. These works played a crucial role in introducing authentic Japanese art to the West, but this role has been overlooked in current scholarship because they are not ‘originals’. This paper aims to examine the close cultural interactions between Britain and Japan through the role of reproductions and the activities of Japanese art specialists of the two nations.