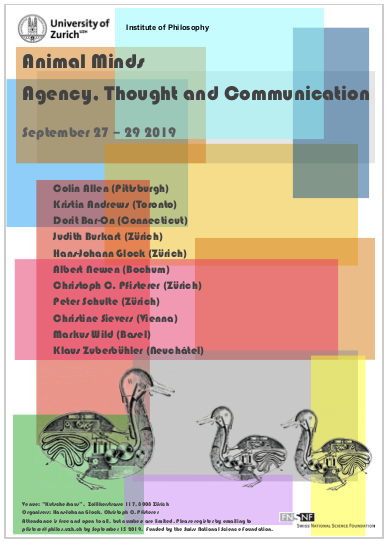 Do some non-human animals share at least certain mental capacities with humans, and if so, which ones? Answers to this question depend both on factual findings concerning the nature and capacities of animals and on how one construes contested concepts such as that of a mind and more specific notions. The conference approaches animal mentality from a transdisciplinary perspective and focuses on interconnected aspects of animal mentality that continue to be contested in spite of recent discoveries by cognitive ethology:

The conference brings together internationally renowned experts, not just concerning animal minds in general but concerning these issues in particular.

Attendance is free and open to all, but numbers are limited. Please register by emailing to pfisterer@philos.uzh.ch by September 15 2019. We have some open slots for respondents; if you are interested in commenting on a paper, please contact us early.