The LHCb experiment at CERN in Geneva, in which physicists from our institute play a prominent role, has performed a new measurement showing an unexpected deviation from predictions by the so-called Standard Model. This theory describes the nature and the interactions of the elementary constituents of matter. So far, the Standard Model has been very successful in describing measurements at the Large Hadron Collider (LHC).

In the Standard Model, each elementary particle appears in three “replica” (also called “generations”) which differ only by their mass. The heavier partners of the electron are the muon (μ) and the tau (τ) particles. Why we have three generations of elementary particles is one of the big open questions in particle physics. The theory predicts that processes which produce electrons, muons or taus have the same properties, once differences in mass are taken into account. This is known as Lepton Universality and is a fundamental property of the Standard Model.

The measurement just presented by LHCb tests Lepton Universality by determining the ratio RK∗0 between the probabilities that a Bo meson decays into a K∗0 meson accompanied by a muon-antimuon pair (μ+μ-) or an electron-antielectron pair (e+e-). The measurement is performed in two bins of q2, where q2 is the μ+μ- or the e+e- invariant mass squared. The result reported by LHCb differs in each interval at the level of 2.2-2.5 standard deviations from the Standard Model prediction. 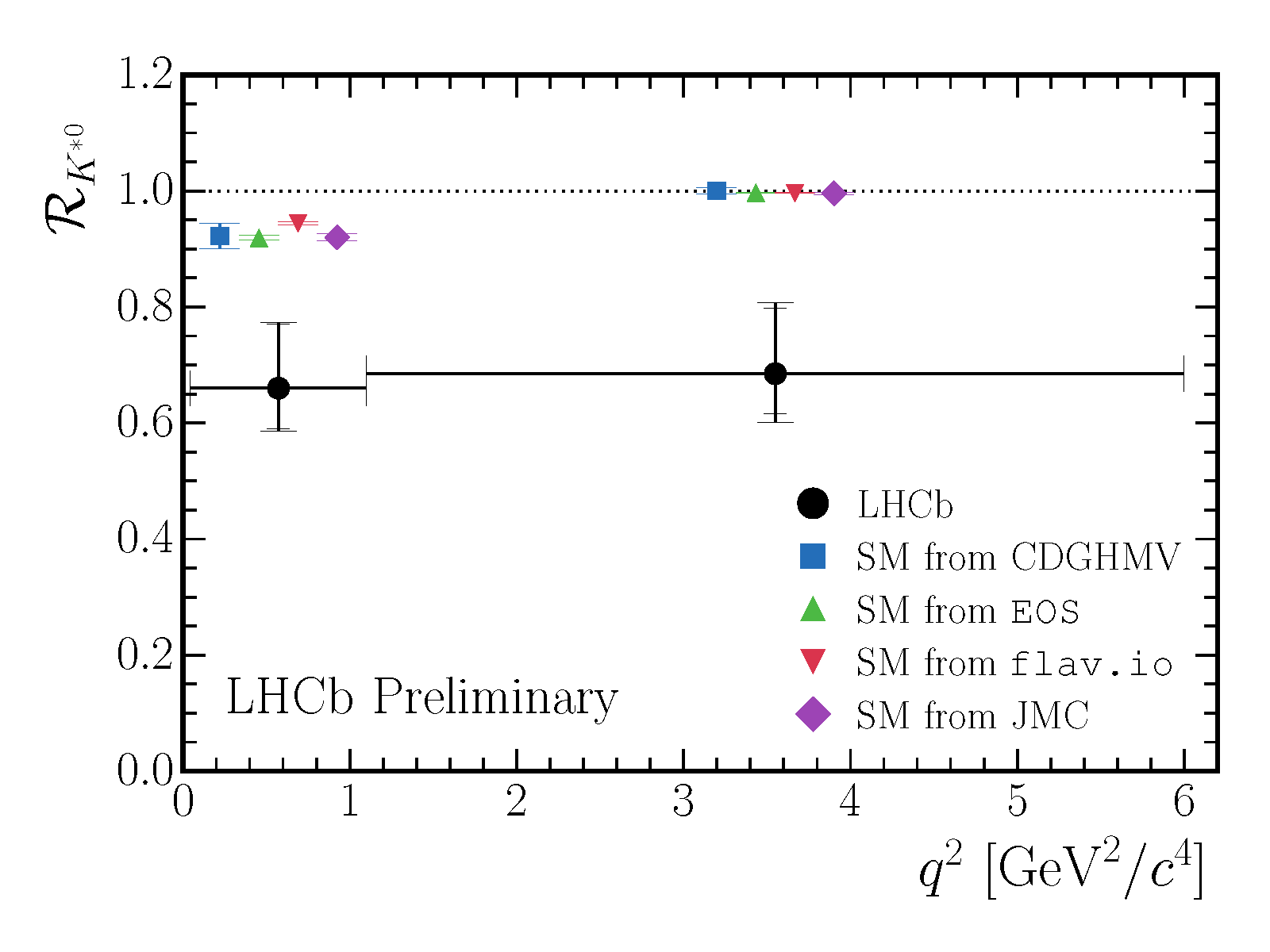 The differences of the measurement with respect to the Standard Model can still be due to statistical fluctuations but they are intriguing when considered in the context of earlier LHCb analyses. The series of “anomalies” in B meson decays started in 2013, with the measurement of the so-called P5’ ratio in the decay B0 → K ∗ μ+μ−, pioneered by the LHCb group at our institute (as seen in the figure below) led by Prof. Nicola Serra and Prof. Ulrich Straumann. 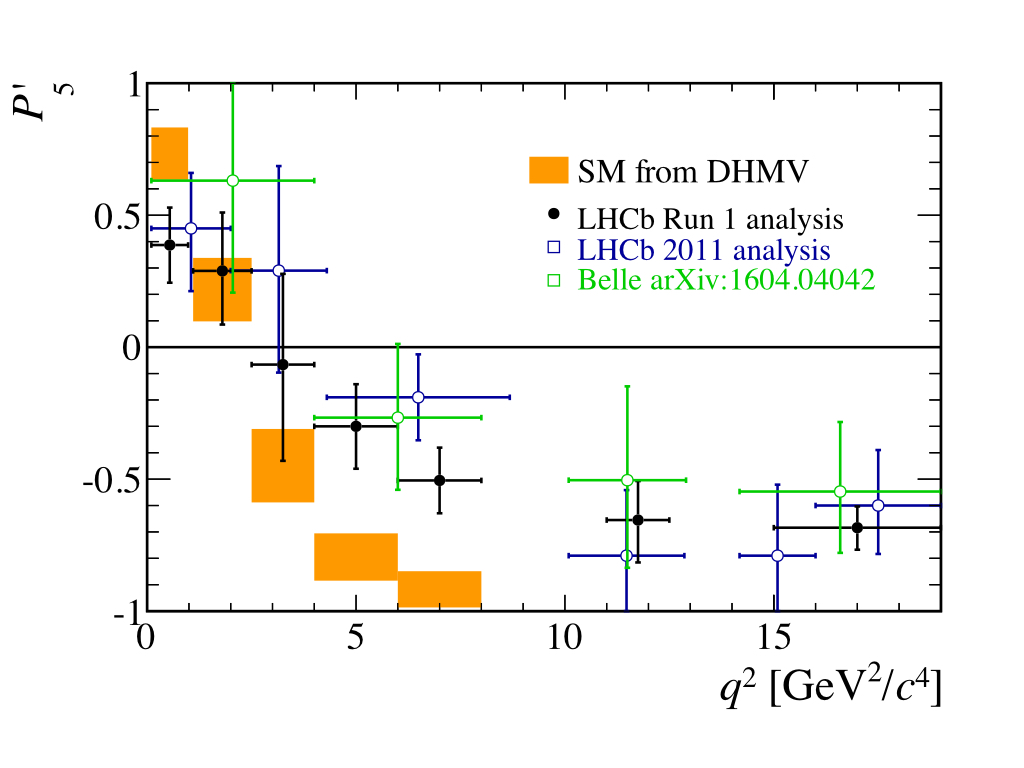 Measurement by LHCb of the observable P5', compared with SM predictions.

Other measurements that test Lepton Universality, such as RK , RD and RD∗ , where the ratio of probabilities for two decays that differ only by a lepton in the final state is measured, also show tensions with the predictions. 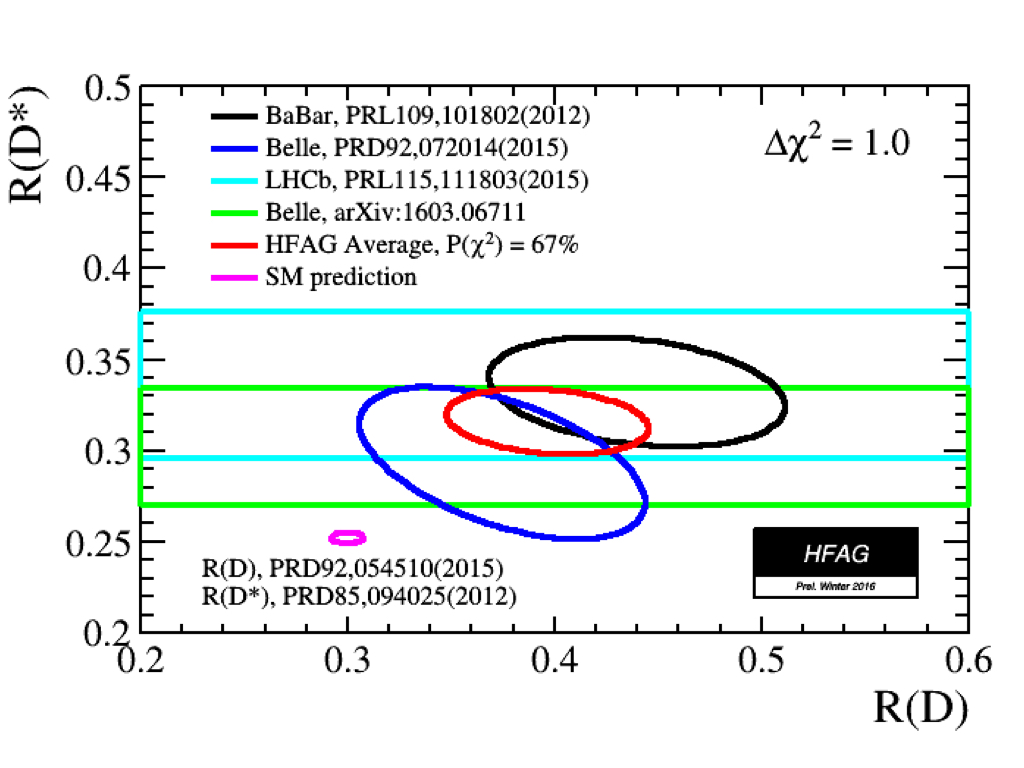 Measurements of RD and RD∗ by the experiments BaBar, Belle and LHCb, the Standard Model predictions is also shown.

Different hypotheses are being considered to explain these observations. The differences might be caused by the existence of new interactions or new particles, but could also be due to statistical fluctuations or problems with the Standard Model predictions. Further data that are being collected by the LHCb and other experiments are needed to better understand the results. The group  of Prof. Nicola Serra and Prof. Ulrich Straumann is involved in various other measurements, that could potentially clarify the situation, and in the upgrade of the LHCb experiment that will take place in 2018.

The collaboration between the experimental and theory groups will be very important for a proper understanding of the deviations. The theory group of Prof. Gino Isidori at UZH, plays a key role in the theoretical interpretation of these “anomalies”. The group has demonstrated that the pattern could be interpreted in a coherent way, putting together the different pieces of the puzzle, and might be the first sign of the existence of previously unknown interactions that distinguish the different “flavors” of elementary particles.