The Deputy President deputizes for the President in all areas and is responsible for the following offices and areas: 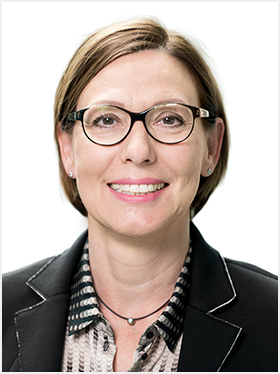 Gabriele Siegert, born in Augsburg in 1963, studied economics and social sciences, earning her doctorate at the University of Augsburg. She then taught and conducted research at several higher education institutions, including the universities of Salzburg and Jena and the Hanover University of Music, Drama and Media. In 2001, Prof. Siegert successfully submitted her habilitation at the University of Salzburg and was appointed full professor of media studies at UZH, with a focus on media economics. She was president of the Swiss Association of Communication and Media Research from 2005 to 2009, head of the Institute of Mass Communication and Media Research at UZH from 2009 to 2013, and Vice Dean of Research at the Faculty of Arts and Social Sciences from 2008 to 2012.  She served as President ad interim from February to July 2020.

Her research specializations are in media economics, media markets and advertising. In her capacity as member of the Federal Media Commission FMEC (from 2013 to 2017), Gabriele Siegert advised the Federal Council and federal officers on media issues and on the development of communication within society. In addition, she chaired the Foundation for Research in Science and the Humanities at the University of Zurich (from 2011 to 2017).