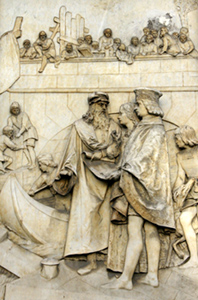 Today, on an international scale, the arts are summoned by both old and emerging nations and political and ethnic groups as to construct visible cultural identities, negotiating and drawing global similarities and local differences. How does scholarly and popular art history contribute to the mapping and making of national and regional identities? An international workshop will look back onto one notoriously challenging case, the art historiographical constructions of Northern Italy and especially Lombardy, from today until the Renaissance, the analysis of which can contribute to a more general investigation. What are the alternative stories set up in past historiography as to expanding and re-writing the master narratives of art? How are the different centers and peripheries of the geography of art related to one another in different political situations? What are the terms and stories defining political, genealogical, and stylistic entities in time and space?

The notion of school, issued from early modern workshop practice, although foundational to art history and even experiencing a revival in global art history, has proven variable, dependent on political circumstances and of limited use for the study of modern and contemporary art. Thus, present-day art geographical mappings may differ significantly from past histories of art (DaCosta Kaufmann, 2004). How are external parameters like territory, politics or culture to be related to aesthetic concepts such as style, period or value (Locher, 2001)? The correlation between space and time, chronology and geography, together with a biographical focus on artistic individuals, groups and genealogies, has proven a challenge for the discipline of art history, as for instance both the art literature of the Settecento and Ottocento (Bickendorf, 1998) and the classification and display of paintings in galleries and early museums prove.

From a historical point of view, Northern Italy and more specifically Lombardy are particularly telling case studies. Northern Italian art literature of the late Cinquecento and Seicento immediately reacted to the publication of Giorgio Vasari’s Lives and opposed to their Tuscan model of art historiography, posing the basis for a general history of Italian art in the 18th and 19th century. The development of North Italian and Lombard art historiography, beginning with Alessandro Lamo, Pietro Aretino, Antonio Campi and Giovanni Paolo Lomazzo in the 16th century, and continuing with Giulio Mancini and Francesco Scannelli in the 17th century, contributed to the formation of regional identities besides the cultural centers of the Peninsula such as Florence, Rome, and Venice. Although already identified by Giovanni Battista Agucchi in the 17th century, for Luigi Lanzi the construction of a Lombard school of painting represented an unsolvable problem for the scientific taxonomy of art history emerging around 1800: according to his Storia pittorica, the political territory and cultural entity would be too fragmentary, and significant figures such as Leonardo da Vinci, Giulio Romano and Correggio could be associated neither genealogically nor stylistically. On the other hand, the very needs for the construction of specific cultural identities such as the one of a Lombard territory needs to be questioned since the implicit political dimensions reach into the present: for example, the weltanschauung and symbolism the Lega Lombarda and the Lega Nord are not based on the reception classical Antiquity, associated with Rome, but refer back to Langobardic and Celtic myths. Moreover, already in the 18th and 19th centuries, a tension between rising Italian patriotism and nationalism and the propagation of a specific Lombard cultural identity can be observed. As to analyze this set of general questions about the art historical construction of cultural identity, by focusing on the North Italian and Lombard case study, the workshop will invite an interdisciplinary group of scholars.

The workshop is organized by the section Political Space and Knowledge Culture. Visual Construction of Identity under Visconti and Sforza Rule, 1300-1500 of the SNF Sinergia project Constructing Identity: Visual, Spatial, and Literary Cultures in Lombardy, 14th to 16th Centuries.