The value presented by LHCb is

The ratio RK describes how often a B+ meson decays to a charged kaon and either a muon and anti-muon pair (K+μ+μ-) or an electron and anti-electron pair (K+e+e-). These decays are extremely rare, occurring at a rate of only one in two million B+ meson decays. The decays involve the transformation of a beauty quark into a strange quark (b→s), a process that is highly suppressed in the Standard Model and can be affected by the existence of new particles, which could have masses too high to be produced directly at the Large Hadron Collider.

LHCb has studied a number of other such ratios comparing decays with different leptons in beauty particle decays (see RK, RK*0, R(D*) and R(J/ψ)). These results revealed hints of deviations from lepton universality, none of which was significant enough to constitute evidence of new physics on their own. However, according to theorists who study possible extensions of the Standard Model, taken together these deviations suggest an interesting and coherent pattern. All previous LHCb results used only the Run 1 data sample. During Run 2 (2015-2018), LHCb collected a much larger data sample containing approximately four times larger number of beauty particle decays and these data are now being analysed intensively. Measurements like RK use the technique of blind analysis, in which the physicists analysing the data do not know the result until the analysis method is finalized and frozen, following an extended review within the collaboration. The measurement presented today is the first lepton universality test performed using part of the Run 2 data set (2015-2016) together with the full Run 1 data sample, representing in total an integrated luminosity of 5fb-1.

The following figure shows the measured value of RK in comparison to tthe previous measurements from LHCb, Belle and BaBar 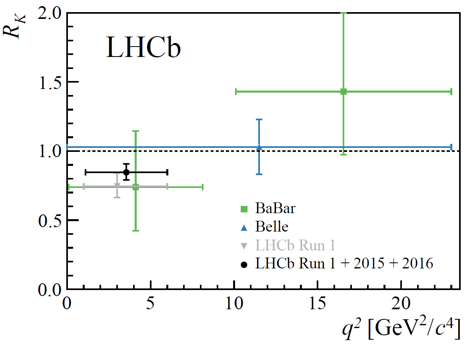 At UZH the group of Nicola Serra is looking to test lepton universality in related processes, including the heavy tau lepton, while the group of Gino Isidori is trying to see if these anomalies can explain some of the long-standing open questions of the Standard Model.