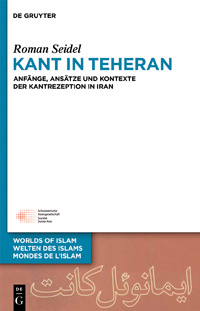 The doctoral thesis was published under the title «Kant in Teheran» with De Gruyter.

Link to the publisher
Link to Google Books

The reception of Kantian thought in Iran serves as an significant example of the transmission of European philosophy into a non-European context, since the philosophy of Kant is being discussed by a variety of intellectuals and scholars and in many different ways. My research approach is based on the assumption, that the transmission of ideas should not be regarded as a simple reproduction, but rather as a creative adaptation of knowledge, taking place in a specific context. In the first part of my thesis I therefore attempt to discuss the historical and ideological conditions of the reception of Kantian thought in Iran: the Iranian tradition of Islamic philosophy as well as the reception of European thought in 19th and 20th century Iran. In the second part I analyze different approaches to specific systematic issues of Kant’s philosophy offered by Iranian scholars. Doing so I compare the respective reading with the Kantian text to which the Iranian author refers to.  Furthermore I attempt to reveal the various motives and contexts underlying the different readings of Kant. The aim of my research is to determine possible links to specific issues of researching Kantian thought from a systematic point of view as well as to question the eurocentric claim that being the heir of Kant and the enlightenment is a privilege of the west.