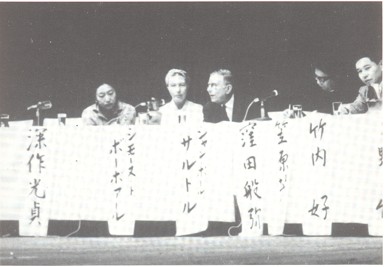 The Second World War brought forth a generation of intellectuals calling for the responsibility of the individual within society. In Japan novelists, playwrights, and poets in particular underscored the responsibility of literature within a modern society. The recently gained freedom of press as well as the rapid spread of the media allowed for writers to simultaneously and mutually acquaint themselves with a  globalized world. In the literary field, dominated by Marxist specialists of romance languages, authors looked towards France in search for intellectual role models. They detected an intellectual ideal as well as a paradigm for their own work in the "littérature de résistance" and the Sartrean concepts of literary participation in the political and social discourse (literature engagée), which they consequently adapted to Japanese conditions. Thus, in post-war Japan a politically engaged and socially critical type of intellectual emerged, showing many parallels to the French concept of the engaged intellectual represented by Jean-Paul Sartre. By the seventies this concept lost its relevance for Japan. Based on the investigation of Japanese concepts of the intellectual since the Meiji-era, this project aims to trace the evolution of the modern Japanese intellectual. Further­more, the analysis of literary discourses in post-war Japan in relation to the Sartrean, existentialist concept of 'the intellectual' defines Japanese post-war writers anew.