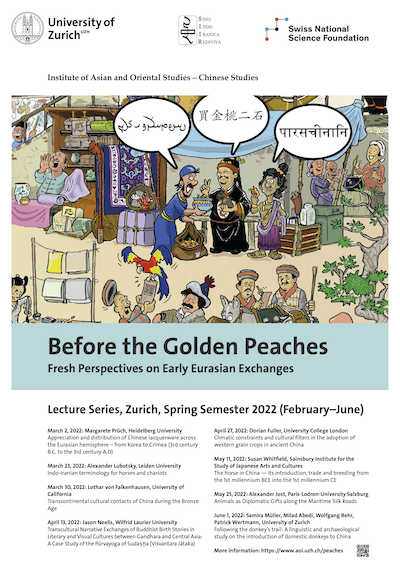 The Golden Peaches from Samarkand – like nothing else – stand pars pro toto for all exotic things that reached China during one of its most cosmopolitan and prosperous eras in history. Eminent scholars like Berthold Laufer and Edward H. Schafer masterfully demonstrated the earliest exchange of exotics between China and regions from across Eurasia by using linguistic, historical, and archaeological data. Beyond doubt, tremendous progress has been made in all these fields ever since.

With this series of lectures, which is part of the project “Sino-Indo-Iranica rediviva”, we bring together scholars from across the world and from diverse fields to present innovative insights into the earliest relationships between China with Inner Asia and the Ancient Near East. 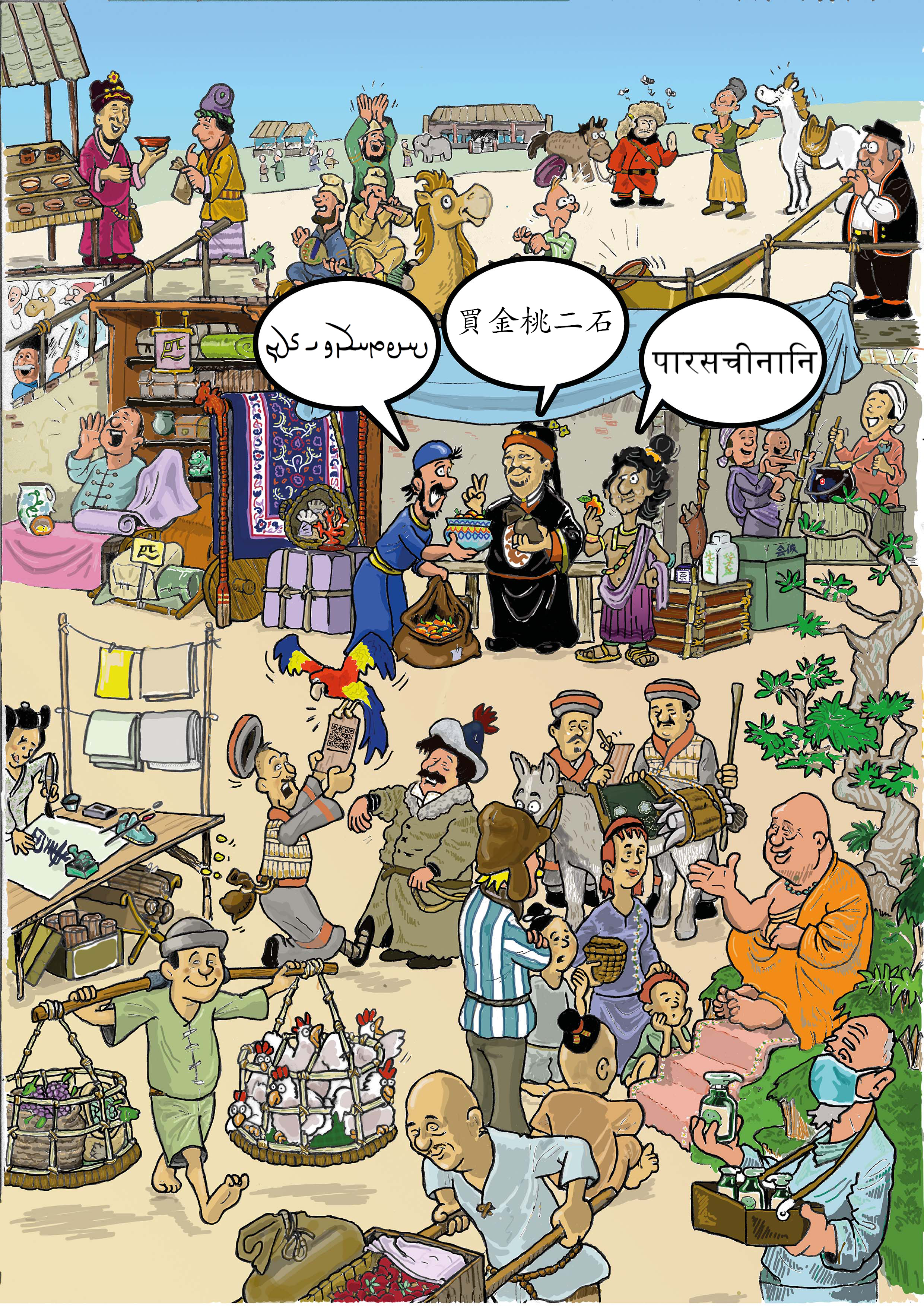 March 2, 2022: Appreciation and distribution of Chinese lacquerware across the Eurasian hemisphere – from Korea to Crimea (3rd century B.C. to the 3rd century A.D)

Throughout the 3rd century B.C.E. to the 3rd century C.E. approximately, mainly during the Han Dynasty (206 B.C.E. -220 C.E.), lacquer ware was highly appreciated within China and notably beyond the Chinese borders. Findings within the Eurasian hemisphere testify to the fact that lacquered food and drinking vessels as well as small boxes were regarded as valuable and luxury commodities or gifts.

Lacquer objects on the Korean peninsula come from excavations of tombs from the Han dynastic commandery Lelang (todays Pyeongyang, North Korea) and bear testimony to the most eastern distribution of these precious Chinese goods. On the other hand, the discovery of fragments of Chinese lacquer boxes from the excavation of Scythian–Sarmatian tombs on the Crimean Peninsula caused a sensation, as they were the most western findings of this kind so far. They had travelled to the Black Sea region over a distance of approximately 6000 km.

The talk will shed light on the lacquer production within the Chinese territory and the spread of lacquer ware to the East and the West.

In my talk I am going to discuss the terms for horses and chariots which we can reconstruct for Proto-Indo-Iranian, the parent language of the Indo-Aryan and Iranian languages. Special attention will be paid to the stratification of this vocabulary, from Indo-Anatolian to Core Indo-European to Indo-Iranian. This will allow us to put the technical advances into a chronological perspective and to correlate the linguistic and the archaeological data.

March 30, 2022: Transcontinental cultural contacts of China during the Bronze Age

In light of a century of archaeological research, it is becoming ever more clear that the rise of China’s unique civilization did not occur in a vacuum, but was linked—in more or less tenuous ways—to developments elsewhere in Eurasia.  Without going much into detail, this lecture will provide assorted comments on a provisional list of cultural elements that may have reached China from areas further West before the late 2nd-century BC expansion of the Han empire into Inner Asia.  One may preliminarily distinguish three phases of cultural contacts, with indication of a considerable increase in their intensity during the early to mid-first millennium BC.

April 13, 2022: Transcultural Narrative Exchanges of Buddhist Birth Stories in Literary and Visual Cultures between Gandhara and Central Asia: A Case Study of the Pūrvayoga of Sudaṣṇa (Viśvantara Jātaka)

Stories and storytellers circulated via long-distance trade routes between South Asia, Central Asia, and China along with traders in exotic commodities. Buddhist birth stories labelled as Pūrvayogas and Avadānas in Gāndhārī manuscripts from the first century CE provide very early literary evidence for the development of narrative genres, while a global survey of so- called Jātakas in Gandharan art reflects alternative patterns of selection. Somewhat surprisingly, the only attested example of an overlap between literary and visual cultures of Gandharan rebirth narratives is a Gāndhārī version of the Sudaṣṇa Pūrvayoga, which corresponds with depictions of the widely-known Viśvantara Jātaka in Gandharan sculptures. This talk will aim to look beyond Gandhara at versions of this narrative transmitted in a Sogdian Buddhist text and localized in Gandhara by Chinese visitors, who drew upon their own sources. The transmission of visual narratives of Buddhist birth stories at nodes of Upper Indus capillary networks and in the Tarim Basin will also be examined in order to showcase transcultural exchanges of Buddhist images in different media.

April 27, 2022: Climatic constraints and cultural filters in the adoption of western grain crops in ancient China

Susan Whitfield, Sainsbury Institute for the Study of Japanese Arts and Cultures

Horses were at the heart of the cultures of the steppe but did not, the evidence suggests, play an equivalent role among the peoples ruling in the first millennium BCE in the Yellow and Yangzi river valleys of China. However, they become increasingly important, especially for these peoples' military encounters with the steppe. This lecture considers what we know of the horses and breeding programmes introduced in the first millennium, and discusses why trade remained essential to meet growing needs, both of the military and the elites of the kingdoms of China.

May 25, 2022: Animals as Diplomatic Gifts along the Maritime Silk Roads

When looking at single instances of diplomatic exchange, gifting animals often appears as marginal and curious. A closer observation, however, reveals that this is a very systematic phenomenon, which can be encountered in earliest historical sources and reaches until present times. The maritime spaces of the Pacific and Indian Oceans are surrounded by extremely various types of animal habitats as well as human political cultures in direct and indirect connection with each other for Millennia. Therefore it forms an ideal instance for an investigation of this topic. This presentation will not only discuss the process of gifting animals itself but will also relate it to questions of cosmologically relevant symbolism and of human-animal relations as well as of the practical issues encountered when transporting and keeping animals.

June 1, 2022: Following the donkey’s trail: A linguistic and archaeological study on the introduction of domestic donkeys to China

In this talk, we will compare archaeological evidence, art historical data as well as historical sources and manuscripts with findings from historical linguistics to trace the tangled paths trodden by domestic donkeys and their hybrid relatives on their way to Early China. The data at hand suggest that donkeys were already known in Achaemenid Persia and quickly gained popularity among the adjacent steppe peoples as powerful pack and draft animals. As such they moved further east where they ultimately became known to the Han dynastic court as domestic animals valued by the Xiōngnú 匈奴.

It is noteworthy that Chinese words for donkeys and donkey-like animals emerge at least a century before the reign of the Han Emperor Wǔ 武 (157–87 BCE) who decided to procure large amounts of donkeys to for his war campaigns into the Western deserts. In the Early Chinese textual record, the word *C-ra (> lǘ 閭), associated with an animal with a long face, a long forehead and rabbit-like ears, along with its more widespread orthography lǘ 驢 and the variant *rˁoj (> luó 驘/騾) suddenly appear around the end of the third century BCE. All these terms seem to reflect attempts to transcribe foreign words for the beast of burden, which were ultimately derived from dialect forms or reflexes of different diachronic borrowing stages of an etymon related to Middle Persian χar ‘donkey’ and congeners. However, the Middle Persian word χar itself is highly controversial in terms of its traditional etymology and may have originally been related to the broader semantic field of ‘dark, obscure, dumb’. A comparable metonymic shift of meaning seems to be reflected in earlier Chinese designations for dark horses.

We hope that our comparative linguistic analysis will allow a diachronic anchoring and trajectory useful for a further interpretation of the archaeological and historical data.