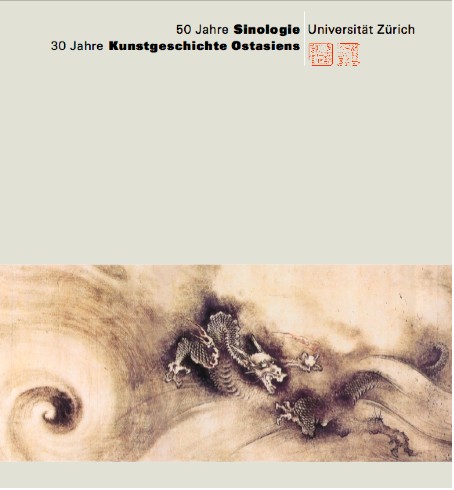 Fifty Years of Sinology / Chinese Studies at the University of Zürich

The Beginnings at the Florhofgasse

The beginnings of the institute reach back to 1950, when the cantonal government decided to establish an associate professorship, which was then referred to as “Academic Learning on China”, or German “Chinakunde”. After resolution no. 731 of January 16, 1950 was passed by the cantonal government, the post was filled by Eduard Horst von Tscharner. Upon request by the ministry of education, the education council authorised the yearly amount of 500.00 CHF for the sinological institute, which was also allocated two rooms on the ground floor at Floorhofgasse 11 in Zurich. It was in these premises, which essentially consisted of the sinological library, that teaching and research was done in the early days.

While located at the Floorhofgasse, the library only expanded rather slowly. One exception was the well-stocked private library left behind by von Tscharner, which the institute was able to acquire in two stages – in 1964 the Chinese language part was bought, and in 1965 all the works in western languages were obtained. While this was a welcome addition to the collection, it meant at the same time that the institute at the Floorhofgasse was running out of space. The matter was passed on to Robert P. Kramers, who succeeded von Tscharner as associate professor in sinology at the beginning of the 1964 winter term (cantonal government decision no. 2995, 23 July 1964).

During the winter semester of 1968/69, the faculty decided to establish a new professorship, while simultaneously introducing a degree programme in Japanology, which is how the institute came to be named Institute of East Asian Studies (German Ostasiatisches Seminar, cantonal government decision no. 3028, 28 August 1968). The Leiden-educated Dutchman Cornelius Ouwehand (1920-1996) was appointed to the new position in Japanology, and successfully initiated the subject until being conferred emeritus status in 1986 .

Expansion: The Institute at the Mühlegasse

Between 1965 and 1968, what was initially little more than a sinological library had become the Sinological Institute, and finally the Institute of East Asian Studies. This development resulted in the need for larger premises, as the space at the Florhofgasse soon became too confined. The new premises for the Institute of East Asian Studies, located at Mühlegasse 21 in Zurich, previously housed the Piano House Ramspeck. The fundamentally new use of the premises was remarkable in as far as it was the new professor who had taken it upon himself to search for a new building. It was via a newspaper ad that Professor Kramers came into contact with the Ramspeck family, who ultimately agreed to a long-term lease of the property to the Unversity of Zürich. A 116,000 CHF credit for the conversion of the building was agreed by the cantonal government. It was Professor Kramers’ unusually proactive character that led Dr Walter König, head of the educational council of the canton, to encourage other professors to follow suit when he addressed the crowd during a speech on the occasion of the inauguration of the new institute („to follow the good example set by Prof Kramer!“). In any case, on May 27 1970, this is what the local Tages Anzeiger newspaper reported under the heading „A Professor’s successful flat hunt“.

The institute moved to the new building in September 1969. From its inauguration on May 22, 1970, it housed the departments of Sinology, Japanology, and from 1975 Korean Studies as well (Korean Studies however was not taught for long). The East Asian disciplines flourished in the newly renovated building. For example, the yearly payments for each of the libraries was substantially increased to 27,500 CHF per library. The division of the library into a Chinese language library, a Japanese language library, and what came to be referred to as the so-called Western Library; German “Abendländische Bibliothek“) can also be dated to this period. The latter includes western-language books that deal with China, Japan, Korea and East Asia. The most generous financial support of the Swiss National Science Foundation also contributed to the expansion of the teaching and research library, whose holdings surpassed 40,000 volumes.

The Current Institute at Zürichbergstrasse

At the beginning of the 1980s, space would again become restricted, which was a problem for the libraries in particular; already in 1981, parts of their holdings had to be stored elsewhere. In addition to the four storeys already rented, the attic and the basement came to be used, which resulted in the institute being spread across six floors, yet the libraries’ holdings still had to be split. Part of the books of the East Asian Library was stored in the old library rooms of the Institute of History at the Hirschengraben, while another part was later placed in the university’s air raid shelter located next to the parking garage. While this situation further complicated the librarians' work, students were making remarks about the excellent protection the Institute of East Asian Studies would have in case of an emergency.

The director at the time, Prof Dr Konrad Akert, saw the restricted size of the premises at the Institute of East Asian Studies as an important issue, and the search for larger premises was given first priority in 1985. Several properties were viewed – one of them even located in Oerlikon – and ultimately, Zürichbergstrasse 4 was designated as the new site. After intensive planning and a protracted period of conversion, the Institute was moved there in March 1992, and officially inaugurated on December 17 of the same year.

The building, which was constructed in 1845, served several purposes after it was acquired by the canton in 1931. After 1948/49, part of it was used by the Institute of Biochemistry, while after 1961, parts of the Dental Institute were housed there. Moving the Institute of East Asian Studies to the new building was a protracted, troublesome, and above all expensive undertaking. The site manager and cantonal councilor Hans Hofmann remarked the following during the inauguration: “Since its construction, the building has been used for various purposes, and its internal structure was changed accordingly each time; however, these changes weakened its structure to the extent that during yet another modification in 1986, the damage inflicted could not be fixed any more through simple means. As the so-called “Zum (oberen) Sonnenbühl” Building had been designated an art historical and cultural structure worthy of protection and of cantonal significance, the demolition and new construction was out of the question […] which is why the conversion was to be planned as a curettage.” The contract for the conversion was awarded to the Zurich architecture firm Tilla Theus and Partners, and cost substantially more than the previous conversion at the Mühlegasse premises.

At the beginning, the Institute of East Asian Studies only occupied the ground floor, both gallery floors, and the first upper floor of the converted building. The basement housed the library of the Institute of Psychology, whereas a branch of the Romanic Seminar was located on the attic floor. As was the case at Mühlegasse, moving to Zürichbergstrasse also meant a welcome increase in floor space, as well as an improved infrastructure. The library in the new building now provided enough reading desks for the users, and the work of the employees was greatly facilitated in that the librarians now had their own offices. The new technical infrastructure of the new premises was now suitable vis-à-vis the needs of a modern university, which was evident for example in the visual teaching tools supplied, as well as the IT network between offices. Almost 25 years after the move to the present location at Zürichbergstrasse, the fact that over 1,000 running meters of books from the Chinese Library alone had to be stored in a room adjacent to the underground car park across the Institute of East Asian Studies illustrates just at what pace the collection keeps growing. Also, the attic floor was converted into offices for the institute after the branch of the Romanic Seminar had moved out, and in 2004 the library of the Institute of Sinology moved, while the building's basement space was converted and then came to be occupied by the Western Library.